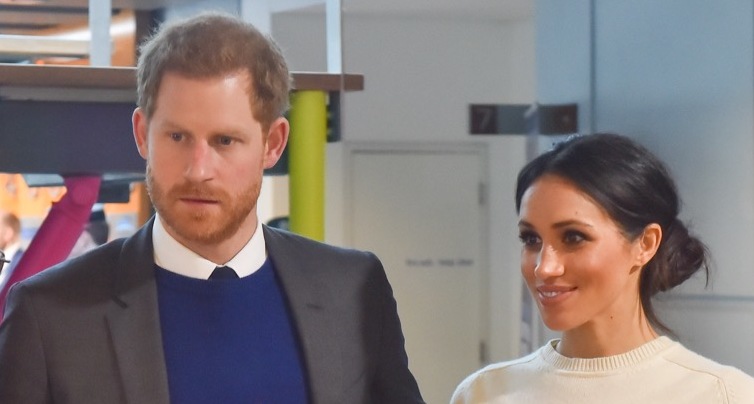 It seems that Meghan Markle and Prince Harry, or the Duke and Duchess of Sussex, are still everyone’s favorite newlyweds. On Saturday, they attended the wedding of Princess Diana’s niece and Harry’s cousin, Celia McCorquodale, to George Woodhouse in Stoke Rochford, England. It’s worth noting that Celia is Lady Sarah McCorquodale’s daughter, who is the late Princess Diana’s older sister. For the special event, Meghan Markle looked incredible in a patterned blue and white Oscar de la Renta dress. She also wore a white fascinator and white heels. For those who may want to shop the Duchess’ wardrobe, the dress retails for $5,490.

What’s even more interesting is that the 36-year old Duchess of Sussex had a hard time walking in those beautiful heels on grass. As some photos and videos proved, she almost took a tumble as she slipped. Thankfully, her husband was there and held her hand and she managed to avoid a disaster. It’s also worth noting that on Thursday, Meghan took part in her first royal engagements alongside Queen Elizabeth II, and it was a very special moment.

It’s very interesting that, according to experts, the Queen took someone so new to the royal family on the royal train. The protocol does not say that, and Her Majesty didn’t do that for Kate Middleton on their first outing together. Moreover, Kate had to wait nine months until the Queen finally invited her to join her for some royal engagements.

Meghan should feel very privileged because it was the Queen herself who personally invited her away. Also, their body language and warmth showed just how close the two have become and what a strong bond they came to have. The Queen has welcomed Meghan in the very best way possible.